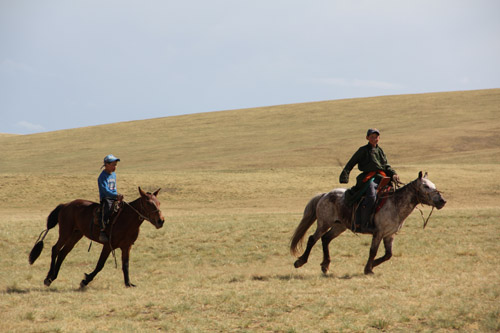 This beautiful lake is the largest in eastern Mongolia (the northern shore is actually in China). The surrounding countryside is mostly grassland, though there are a few trees. The lake has a maximum depth of 50m and, if you’re equipped with the proper paraphernalia, is a good place to fish.

The banks of the KhalkhinGol, in the far eastern part of Dornod, are of particular interest to war historians because of the battles against the Japanese in 1939. The dry, unpolluted air ensures that most of the relics, which are just lying around, have been well preserved.

Numerous war memorials line the banks of the river. The memorials are real socialist masterpieces, built to honour the Russian and Mongolian soldiers who died here. The largest memorial is the 50m KhamarDavaa. A museum in Siimber (also known as Tsagaannuur), and a smaller one in Choibalsan, offer some explanations (in Mongolian) about the history of the battles.

Another interesting site in the region is IkhBurkhant, where there is a huge image of Janraisig (Sanskrit: Avalokitesvara) carved into the hillside. The carving was commissioned in 1864 by local regent Bat OchiriinTogtokhtooriin, or Tovan (van means ‘lord’) and was reconstructed between 1995 and 1997.

Historical monuments Following are the historical and cultural monuments which are located in the north of Kherlen River valley in Tsagaan-OvooSoum, there are ruins of Kherlen Bar of Qidan period (11th century)

Choibalsan’s Mongolian Heroes’ Memorial. It is a large arch with a soldier on horseback charging towards the enemy.

According to the chief monk, this monastery was built around 1840 and was once very active. It contained three northern temples and four southern temples, but less than half the 800 monks could be accommodated at one time, so most had to pray outside. The Mongolian security forces descended on the place in 1937, destroyed all records and arrested most of the monks, none of whom has ever been heard from since. In June 1990 the monastery reopened and it now has two small temples where about 35 monks worship.

Kherlen Bar Khot is the location of some small-scale ruins and a 3m-high tower from a 12th century city, once part of the ancient state of Kitan. There are also some balbals (Turkic stones believed to be grave markers) and, predictably, a ChinggisKhaan memorial of sorts: a rock called the ‘Chinggis Bed’, which commemorates his stay here. You can see a picture of the tower in the Choibalsan History Museum. Kherlen Bar Khot is about 90km West of Choibalsan, in the sum of TsagaanOvoo. It is on the main road between Choibalsan and Ondorkhaan, and is worth a look if you have your own vehicle.

KhokhNuur of KharZurkh (Blue Lake of Black Heart) Blue lake is very important place in Chinggis khan’s childhood and fellow-hood, also for making changes in his life. When Temujin /Chinggis khan’s boy name/ young man were escaping away from his enemies, he hired in this lake water and got free. Later Temujin brought BurteUjin as his fiancée, married and started his family. After that Temujin became the king of All Mongol tribe. After that Temujin was conferred as Chinggis Khan, he stayed in this area many times.

River Kherlen:  River One of our 3 famous rivers, the Kherlen flows from the Khentii Mountains running for 1,264km and flows into the Dalai River in China. There river is full of different kinds of fish such as Sheat-fish, Ruff, Grey Mullet, BrachymystaxLenok and Carp.

Onon River: Flows from Khentiikhan Mountain range, this river runs for 808km before joining the Shilka River in Russia. The Onon runs over 445km of Mongolian land. There are fishes such as Acipencer, Grey Mullet, Sheat- fish, Burbot in this and other rivers such as the Khurkh and Balj which feed the Onon.

Is located among the pine forest close to Dadalsoum at an altitude of 800m, this river consists of 3 multiple rivers. The waters include carbonic acid and sulphur. The first monument to Genghis was built in 1962. 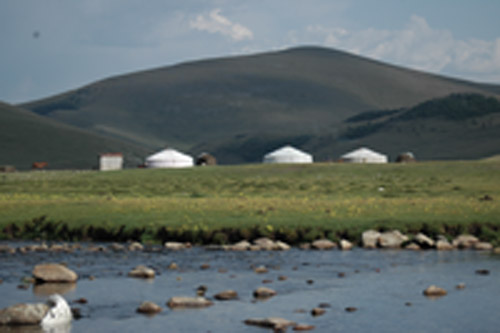 One of the largest Buddhist centre and also an institute of medical and nursing in Mongolia, this monastery was first built in 1784. At its peak it was one of the largest monasteries in Mongolia and home to over 3000 monks and nuns. The main temples and many of the adjacent buildings were destroyed in 1937, in accordance with the communist government’s anti-religious policy. From 1998, the centre of protecting world heritage made a draft of project that will run 7 years to restore the sites of the monastery and the project started to implement from 2000. Locals and Buddhist from all around the world are supporting financially and physically to restore this monastery.

On the Rashaan rock there are numerous carvings and paintings depicting animals and humans as well as carvings of several hundred of tribal seals and around 20 scripts in Orkhon, Hidan, Arabic-Persian, Chinese, Tibetan and Mongolian languages. These historical remains date from the upper Paleolithic age to medieval age. These findings suggest that area around the Rashaan rock used to be the center of western Mongolian culture and civilization. Experimental archeological excavations of minor scale were undertaken in this area and discovered more than 5000 stone tools.

Deer monument around Rashaan rock is the real interesting sight, which will show the Mongolian tribes artwork and carving ability. In the surrounding area there are 12 square tombs and 2 big burial places located in the center. The figures of 7 deer’s engraved to cover the whole surface are largely fainted and worn out.

There are ruins of a wall built by carefully placing pieces of stone on each other and using the mountains side as a support. No clay was used to hold the stones together. This construction is called Oglogch fortress. About 3 km long, the wall has doors on the southern and northern sides. The wall is 3.1 m tall and 2.5 m thick. There are no any ruins to prove that inside of this fortress there were used to be constructions. Researchers suggested that it was a fort of archers or this is the tomb place of royal people. Recently in summer 2002, American expedition group undertook excavation to find out Chinggis khan tomb.

AltanOvoo: The skyline of Dariganga is dominated by AltanOvoo (Golden Ovoo) also called Dari Ovoo by locals. 1354m in altitude, this is a sacred extinct volcano which has been worshipped since the 17th century. In 1913 The Bogd ordered locals to restart the worshipping of the Ovoo. Women are not to go to top, but they can go to the west down area if they wish. There also is a passage where woman can go. In 2004 the President decreed this Ovoo to be a sacred mountain to be worshipped.

Bayan DulaanyAgui:  (Cave of Bayan Dulaan) This cave mountain is located on the border of Dariganga and Naran Sum at an altitude of 1752m. This mountain used to be worshipped only during battle time. The cave is west of the extinct volcano but, nobody knows it’s a cave unless you go much closer to it. It’s a hidden place that first you have to crawl for 20m then you can stand up and walk. This part of this cave is basalt and the cave then becomes a tube shape with a diameter of 70 cm. The cave is 50m in length.

ShiliinBogd:Located 60km southeast of Darigangacentre, this is the highest peak in Sukhbaatar at 1778m. This extinct volcano has a crater of 2km wide and over 300m deep. From the crater rim you can see the other 180 extinct volcanoes in the area.

TaliinAgui:  14 km northwest of ShiliinBogdUul, located in the middle of a barren steppe, there is the cave TaliinAgui. It was hard to get to this place before but now a passage has been made. After entering, the cave trends downward. TaliinAgui is a 10,000 cubic meter with a 200m long basalt cave. The cave walls are multi-coloured and very beautiful. From its type, this cave is considered to be the largest in Mongolia.

LhachinvandadUul: Located 70km southeast from Erdenetsagaan sum centre of Sukhbaatar province, this mountain has a flat and rocky top and is at an altitude of 1233m. The mountain extends for over 2-3km. This mountain covers 588km² and together with its east and west subordinate mountains has been strictly protected since 1965.

Ganga Nuur: The lakes Ganga Lake, Kholboo Lake, Erdene Lake, and Duut Lake are home to thousands of migrating swans. In the autumn very rare swan gatherings take place in these lakes. In 2004, 629km² of area including Ganga Lake, AltanOvoo, Moltsog sand dune was decreed as the Dariganga Natural Park.

BudriinChuluu There is a collection of granite rocks extending over 15km which date back to the Mesozoic Era in the southern area of Ongon Sum called the Burdiin Stone. The rock is 10m high. Through the years it has been eroded and many holes and cracks are found.

Volcano platform in Dariganga 30m wide volcanic rock spreads about 10,000km² of area is located in the eastern Sums in Sukhbaatar Province. 222 extinct volcanic mountains are aligned in 5-6 parallel lines along the longitude. The mountains were created 10-15 million years ago.