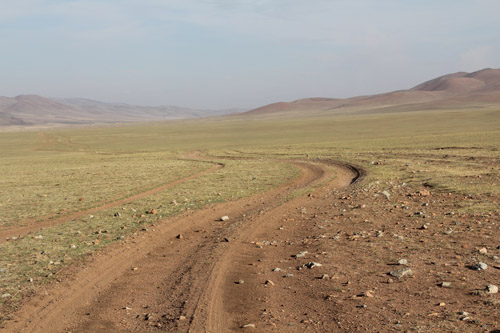 The rocks of Ergeliin Zoo Natural Reserve are World famous for its paleontological remains of Dinosaurs of the Mesozoic Era. The Natural Reserve was declared in 1996 and covers 60,900Ha of land 30km northwest of the centre of Khatanbulag sum. The northern slope is sheer. Giant dinosaurs lived here in the Mesozoic Era and new finds of ancient animals are frequently recorded.

NoyonKhutagtDanzanravjaa (1803-56), a well-known Mongolian writer, composer, painter and medic, was born about 100km south-west of Sainshand. The museum has a collection of gifts presented to Danzanravjaa by Chinese and Tibetan leaders, costumes used in his plays, Buddhist statues presented to him by the 10th Dalai Lama, and some of his paintings. He was also very interested in traditional medicine, so the museum has a collection of herbs. Look out for the jar in front of his statue, which contains the Danzanravjaa’s bones; the poet’s mummified body was burned along with his monastery in the 1930s.

Khamar Monastery was established in the 1820’s by the famous 19th century Mongolian educator and literary figure Danzanravjaa. The Monastery was an important centre of the Buddhist “red sect” and seat of the GobiinDogshinNoyonKhutagt (“Terrible Noble Saint of the Gobi”). An outspoken critic of the society in which he lived, Danzanravjaa fought against the rigid class and gender distinctions of his day. He devoted great efforts to the cause of public education, which he promoted at Khamar Monastery through the establishment of an inclusive public school, theatre, museum and library.

NoyonUul is an extinct volcano of the Gobi Altai mountain range. Its elevation is 2403m. There is a famous cliff, which has a smooth external appearance, shining like a mirror from a distance, and thus was called mirror rock. Sliding processes during episodes of folding movement formed the cliff. 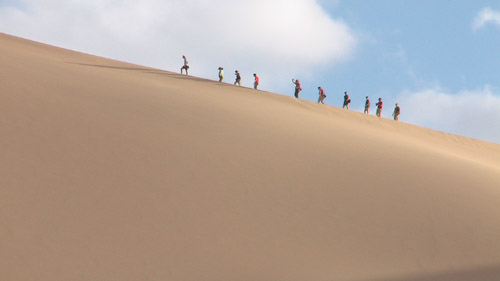 (Khongor sand dunes). An area named KhongorEls has an extraordinary length of 180km and 15-20km wide lies on the northern part of the mountains Sevree and Zuulun.  Mountain Sevrei lies to the south of the dunes and the KhongoriinGol (River) runs along the northern edges enabling lush green grass to grow, contrasting beautifully with the yellows of the dunes.

The mountain range is composed of schist and sedimentary rocks of Paleozoic age and consists of three spurs: Baruun, Dund and ZuunSaikhan and extends for over 100 km. The highest peak is ZuunSaikhanUul which reaches 2800m. The park also contains numerous types and species of fauna, including Argali sheep and ibex.

Yolyn am is the narrow canyon of a river which flows through Mountain Zuunsaikhan (2815m), 62km northwest of Dalanzadgad town. The gorge has sheer rock walls with a height of about 200m in the central part. At its narrowest only two people can pass at a time. It has been protected since 1965.

Galbiin Gobi is located on the territory of Khanbogd sum. In its northern part one can see the ruin of the tree monasteries built in the 17th century in which NoyonKhutagtdanzanRavjaa put on his plays. The ruins of the monasteries have enjoyed state protected area since 1998.

HermenTsav is a canyon with a beautiful oasis, 6 km wide and 15 km in length, located at a distance of 400 km from Dalanzadgad city. The canyon is 30m deep with natural formations of cliffs, and looks like the remains of ancient cities and temples or of icebergs drifting on the ocean, even like huge dinosaurs, turtles and crocodiles. Scientists have defined it as an inland sea bed from some 200 million years ago. HermenTsav is known not only by its beauty of natural formation but also by its trove of dinosaur fossils. 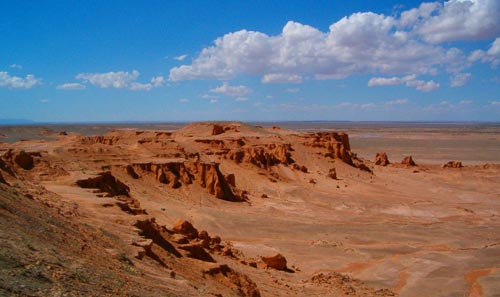 Bayan Zag is located near the centre of Bulgan sum, and archaeological finds of the Palaeolithic Era where found here. Bayan zag is internationally famous for dinosaur remains including; complete dinosaur skeletons, eggs and hatchlings, from the Cretaceous period. Dinosaurs discovered here include Protoceratops, Oviraptor and heavy armouredPinacosaurus. Dinosaur eggs with a diameter of 10-15cm have been found here, in Mongolia for the first time in the world.

Is an oasis that is located 40km from the north of Khermentsav. The Zulganairiver takes its source from the west mountain of Altan and flows to the west for 20km and then dissappears into the sand. The Zulganai River has a beautiful dense forest with cane and willow. The cane grows to about 3m high. 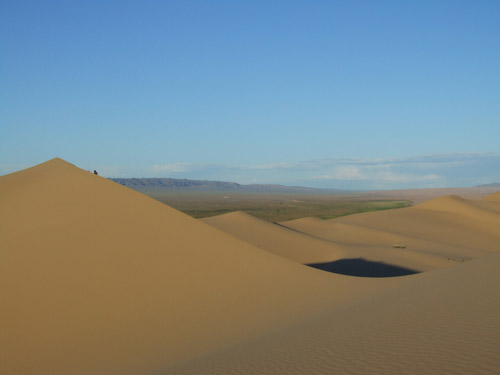