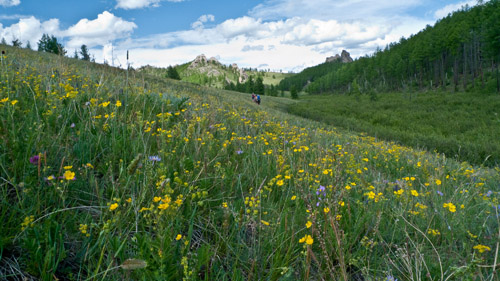 Is divided into “Gobi A”, or Southern Altai Gobi, and “Gobi B” or Dzuungariin (East-handed) Gobi. “Gobi A” is over 4.4 million hectares in the southern part of the Aimag. “Gobi B” is 881,000 hectares in the Southwest of Gov-Altai and in neighboring Khovd. Together, the undisturbed area is the fourth largest biosphere reserve in the world and protects wild ass, Gobi bears, the wild Bactrian camel and jerboa, among other endangered animals.

This is a vast area of sand dunes that follow the Zavkhan River and terminate in the Khyargas Depression which are around 330 km long and an area of 2,724 km². In Jargalantsoum valley of the Zavkhan River there are the beautiful fresh water lakes of Ereen and Ajig.

This hilltop near the river, and just to the north of the main street, features a pavilion and three concrete animals: an elk, ibex and argali sheep. The views from the top aren’t spectacular, but it’s worth the short climb to get some notion of how the city is laid out.

The TsenkheriinAgui (also known as KhoidTsenkher) caves are reasonably attractive but the draw card is the cave paintings inside, which are approximately 15,000 years old (some sources say 40,000). There is also about 15,000 years worth of bird dung in the caves, so watch where you step. There are numerous passages to explore, with the largest cavern being about 15m high, with the floor measuring around 12m by 18m. Unfortunately, some recent graffiti has marred the cave paintings. Controversy has erupted among experts about the interpretation of the paintings. It is interesting to note that both mammoths and ostriches are depicted on the walls, proving that both lived in Mongolia up to approximately 15,000 years ago. 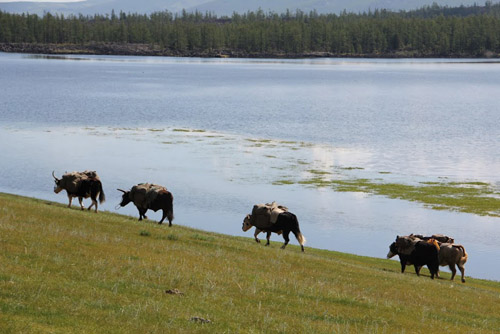 About 40km to the East of Hovd town is Khar Us Nuur (Black Water Lake), the second largest freshwater lake (15,800 sq km) in Mongolia – but with an average depth of only 4m. HovdGol flows into this lake, creating a giant marsh delta. Black Water Lake is the perfect habitat for wild ducks, geese, wood grouse, partridges and seagulls, including the rare relict gull and herring gull – and by late summer, a billion or two of everyone’s friend, the common mosquito. Be prepared for the blighters, otherwise your life will be a misery. The best time to see the birdlife is in May and late August.

As at Uvs Lake, birdwatchers may be a little disappointed: the lake is huge, difficult to reach because of the marshes, and locals know very little, if anything, about the birdlife. The best idea would be to go with one of the national park workers and to head for the delta where the Hovd River enters the lake. The easiest place to see the lake is from the main Hovd-Altai road at the southern tip of the lake, where reed islands also make for good birding. The park plans to encourage ecotourism by setting up observation huts and maybe even ger accommodation in this area. Check with the park office in Hovd.

The outflow from Black Water Lake goes into a short river called Wolf Kharaikh, which flows into another freshwater lake, KharNuur (Black Lake), home to some migratory pelicans. There is a dispute about which lake is the deepest in Mongolia: it is either KharNuur or Khubsgul Lake. The southern end of Khar Lake flows into Dorgon Lake, which is a large salty pond. The East side of Dorgon Lake is an area of bone-dry desert and extensive sand dunes. Just to the South, between the Black and Black Water Lake, are the twin peaks of JargalantKhairkhan Mountain (3796m) and YargaitinEkh Mountain (3464m). You can see the massif as you drive to Olgii from Altai in Gov-Altai Province.

At 4362m, Monkhkhairkhan Mountain is the second highest mountain in Mongolia. You can walk up the peak if you approach from the North side. There is plenty of snow and ice on top, so you’d need crampons, an ice axe and rope but the climb is not technically difficult. A jeep trail runs to the base from Mankhan. The peak is known locally as TavanKhumit.

Tsambagarav Mountain, in the far north-west sum of Bayannuur, is one of the most glorious snow-capped peaks in Mongolia. De-spite its altitude of 4202m, the summit is relatively accessible and easy to climb compared with Tavanbogd but you’d need crampons and ropes. One excellent possible jeep route in this region is to travel north-west from the main Khovd-Olgil road to the Namarjin Valley, where there are excellent views of Tsambagarav. From here you can head West and then South to rejoin the main Hovd-Olgii road, via several Kazakh settlements and a beautiful turquoise lake. You’ll need to be completely self-sufficient for this trip. The other main area to visit is the Bayangol Valley, to the East of Tsambagarav, 100km and three hours of difficult driving from Hovd. A jeep road leads from Erdeneburen sum centre up the mountainside, following dozens of rocky switchbacks. The valley itself is nothing special but there are fine views south-east to Khar Us Nuur and you might be able to rent a horse for the hour ride to the Kazakh-populated Marra Valley. With help you could do a fine three-or four-day horse trek circling Tsambagarav Mountain, or to the Namarjin Valley.

stretching from Black water Lake and Hovd river of Hovd Province to northern border of the country, these legendary and mythical mountains that dominate western Mongolia are called the twin peaks of Kharkhiraa and Turgen Mountain. Standing at an altitude of 4116m above sea level, one can see Kharkhiraa shining from a far. Turgen Mountain at an altitude of 3917 above sea level is a snow-crested mountain and has very beautiful scenery. These mountains further extend to the south continuing at around 2000-3000m. The beautiful AltainKukhii Mountain consisting of the mountains Yol and KhargaitBuural on the west of Hovd River, join the Tsogt and Khalzakhairkhan Mountain. The area around these mountains is listed in the strictly protected area list. There are wild mountain sheep, wild goats, marmots and snow cock, white spoonbill and bustards living in the area around the Mountains.

Is one of the large lakes in Mongolia; Achit Lake is surrounded by Kharkhiraa and Turgen mountains at an altitude of 1464m. The Lake covers an area of 311 km². The rivers Altangadas, Bukhmurun feed into Achit Lake. This is the largest freshwater lake in the province. Ultimately through the Usankhooil river, the stream flows into the Hovd River. The lake is home to flocks of geese, eagles and many other birdlife.

KhankhukhiiNuruu (220,550 Ha) Khyargas Lake (332,800 Ha) both came under protection of the state in 2000. The Khankhukhii Mountain spread into the great depression thus separating the Uvs and Khyargas Lakes.

At 75km long, 31km wide and 80m deep, Khyargas Lake covers 1,406.8 km². The north part of the Lake consists of sand and the south part consists of rocky shore. The Lake is home to various kinds of fish including the Mongolian Ruff and a rare yellow fish. At the end of December the Lake starts to freeze and the ice thickens up to 60-70 cm, then from Aril it starts to melt. There are some hot springs at the north-western side of the lake. The hot springs have aqua and mud cure properties and the mineral water of these hot springs are said to cure liver, bladder, kidney and gastric illnesses. 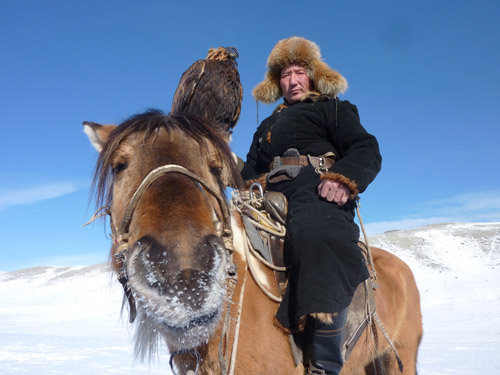 Elevation 1710m.Olgii, the capital of the aimag, is an ethnically Kazakh city that happens to be in Mongolia. You can certainly feel that you are in a Muslim-influenced Central Asian region, rather than in Mongolia: many places have squat toilets; in the city, there are signs in Arabic and Kazakh Cyrillic; the market, which is called a bazar rather than the Mongolian zakh, sells the odd kebab (shashlyk) and is stocked with goods from Kazakhstan. Olgii is 1645km from Ulaanbaator but only 225km from Russia.

Olgii is suffering from the outflow of Kazakhs to Kazakhstan following the break up of the Soviet Union. Olgii is the only aimag capital to have a serious decline in population: about 9000 Kazakhs left the city in 1992 and 1993. Many have since returned, disillusioned with life in the exSoviet republic and the population is rising once again.

madrasah (Islamic place of learning) is worth a quick look, especially on Friday at lunch time when weekly prayers are held, though you may not be allowed inside. The mosque holds the offices of the Islamic Centre of Mongolia. Its unusual angle is due to its orientation to Mecca.

This stunningly beautiful park stretches south from TavanbogdUul and includes the three stunning lakes of KhotonNuur, KhurganNuur and Dayan Nuur. It’s a remote area, divided from China by the high wall of snowcapped peaks, and known to local Kazakhs as the Syrgali region.

Tavanbogd (Five Saints) mountain rises 4374m above the borders of three nations, and for this reason it is also known as Nairamdal (Friendship) Peak. If you sit on the summit, you can simultaneously be in Mongolia, China and Russia (though you won’t need a visa for all three).

Tavanbogd is one of Mongolia’s most spectacular peaks, of interest to professional climbers, and the only one in Bavan-Olgii to be permanently covered with large glaciers (including the 19km long Potanii Glacier, the longest in Mongolia). It’s fairly dangerous, and to climb it you need to be with an experienced group properly equipped with ice axes, crampons and ropes. Don’t even consider attempting it solo. The best time to climb is August and September, after the worst of the summer rains.The massif is made up of five peaks (the five saints) – Khuiten, Naran, Olgii, Buraed and Nairamdal – the highest of which is Khuiten (meaning ‘cold’) at 4374m. 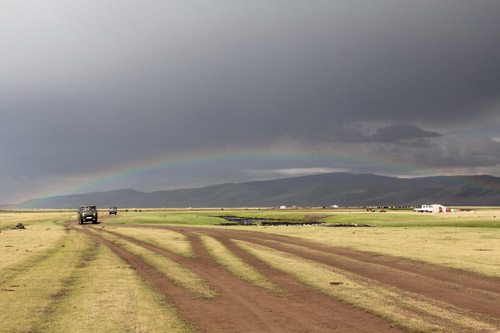 TolboNuur (Frog Lake) is about 50km south of Olgii, on the main road between Olgii and Khovd city, so it’s an easy day trip or stopover. The saltwater lake is high (2080m), expansive and eerie, but a bit disappointing because the shoreline is treeless. There are a few gers around the lake, and the water is clean enough for swimming if you don’t mind icy temperatures. If you want to see, and camp at, some better lakes, keep traveling on to Uvsaimag.